Before we get to talking about Chihuahua training lets take a moment to look at this breeds characteristics as these play a large part in understanding how to train your Chihuahua.

Chihuahuas , often called Chis (CHEE-s) are a lively dog breed that adores human companionship. These pint sized pooches are clever and chalk full of attitude. They are very sweet and lovable, and are perfect for apartment living as they require minimal exercise.

The Chihuahua makes the perfect pal for anyone interested in a long-term companion. They do require careful handling due to their fragile size, and are not the best family dog. Chihuahuas are known to be temperamental, and for the most part are not friendly towards children.

The Chihuahua is recognized as one of the oldest dog breeds. Historical facts concerning the Cholula Pyramids and the Chichen Itza ruins indicate that Chihuahuas have existed before the 16 th century. It is said that the ancestors of the Chihuahua were the companions of the ancient Toltecs during the 9 th century and were used for religious reasons. Although it can not be determined when Chihuahuas came into existence, it is believed that they existed before the Mayans.

Despite time and origin doubts, it is clear that the Chihuahua, dog owners have come to love today, originated in Mexico. The ancestors of the Chihuahua were larger than current Chis, and this is thought to be the result of breeding the original breed known as Techichi with the Chinese Crested dog.

Chis were discovered by famous Spanish explorer Christopher Columbus, who brought the breed to Europe’s attention in the 1500’s. However, it is interesting to note that Chihuahuas were not introduced to North America until the 18 th century. They were finally recognized by the American Kennel Club in 1904.

The name Chihuahua was given to the breed because it was found in the Mexican State of Chihuahua.

Chihuahuas are one of the smallest dog breeds, and are apart of the Toy group.

They stand only 6-9 inches at the shoulders and weigh 2 – 4 pounds. Chis make excellent companions and are extremely devoted to their owner. They show plenty of affection towards their owner and will follow them everywhere.

Chihuahuas are one-person dogs. They are known to establish a close, trusting relationship with one person, and will be suspicious of everyone else. For this reason, they don’t make the best family pet.

They do not require a lot of exercise, which makes them ideal for small spaces. However, they should still be taken for walks at least once a day for 10-15 minutes to give them the exercise they need to keep their muscles strong and prevent obesity.

Chihuahuas and Chi puppies do not get along well with children under the age of 10. It will not tolerate any form of teasing and won’t think twice about snapping at children if it feels threatened or is annoyed. As for other family pets, Chihuahuas tend to only get along well with their own kind. However, they can be accepting of other family pets if they are raised with them from puppy hood.

They make excellent watch dogs, as they love to bark and are not overly accepting of strangers.

Chihuahua’s are a relatively clever breed, but Chihuahua training is not easy. Furthermore, they can be quite temperamental, jealous and territorial if given the chance. For this reason, it is extremely important that Chis are well socialized when puppies and training is pursued. It is possible to raise a friendly Chihuahua if it is well socialized among people as a puppy, but this does take time and needs your constant reinforcement.

Chihuahua’s shed, and come in two coat varieties: short hair and long hair. The short coat Chis are easy to groom, and can be brushed once a week to keep their coat shiny. Long coat Chis need daily brushing in order to keep their hair free of mats and tangles.

Chihuahua’s are one of the longest living dog breeds, and can live up to 18 years or more. However, they are also prone to certain health problems such as hypoglycemia and patellar luxation. In addition, you should also know that the skull of a Chihuahua never fully develops, leaving a soft spot on their heads. This spot is known as molera. If a Chi is struck on the soft spot of their skull they could die as this area is unprotected.

If you are a first time dog owner, or are looking for a companion who will never leave your side and is good company, Chihuahuas are the perfect breed for you. Just remember that successful Chihuahua training needs work and patience and that this breed needs your constant care and attention. 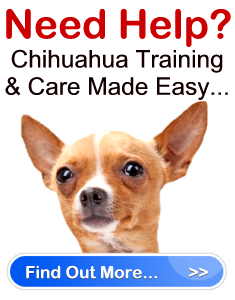